Please join us for our breakfast event. Your attendance supports Navy League activities, and you will meet great people & hear from interesting speakers.

Everyone attending is encouraged to pre-pay online to reduce the wait time at the door during check-in and registration; This will assist us with an accurate headcount for catering food orders. Your assistance with payment three days before the event is appreciated. 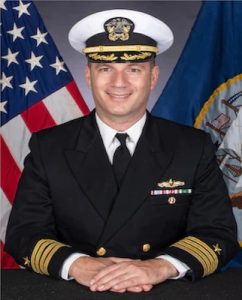 Capt. Tom Chekouras is a native of Boulder Creek, California. He is a 1998 graduate of the University of Nebraska – Lincoln, receiving his Bachelor of Science in Financing and earned his commission through the Naval Reserve Officers Training Corps (NROTC) program. Chekouras earned a Master in Business Administration from Salve Regina University, Newport, Rhode Island and Joint Professional Military Education (JPME) Phase I from the Naval War College.

Chekouras assumed the duties of deputy commodore of Destroyer Squadron One (DESRON 1) in July 2021.